So I had this bricked Nintendo Wii lying around for quite sometime. For about
year or so, it lay there gathering dust. It was not until the end of HillHacks
2015 I managed to build up enough motivation to actually take a look at again,
but this time with proper determination to get it fixed.

Sometime back in 2014 this was a fully functional Nintendo Wii. I used to
occasionally put in a disc of "Wii Sports" and do some Bowling or play
tennis. And I always wanted to play "Resident Evil 0" but never found time to
play it. Then one day a friend of mine wanted to try one of the "Tony Hawk"
Games with the Skateboard bundle[1].  As usual we inserted the Game Disc, it
prompted the Wii needed a firmware update and we gave it the "Yes", update
happened, prompted for a system restart, and then we were greeted by the
following message[2]. 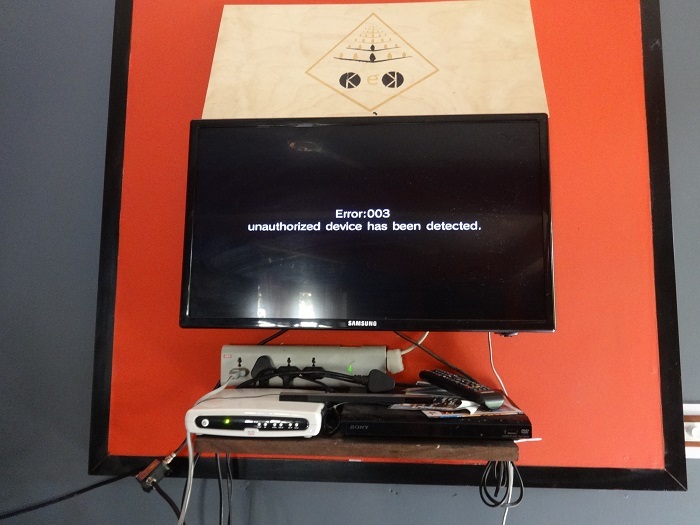 "Error 003 Unauthorized device has been detected"

Of course at the time we both were quite surprised, we thought we did something
wrong with the update, may be it did not go right, after all the error number is
quite small "003" so we thought it may not be serious. But after some searching
we found out that the error is probably one of the hardest errors to fix. So
what follows is a work log that took place in a span of couple of years that
eventually led to fixing of this error.

This is *NOT* intended as a tutorial to fix the Error 003, but if helps someone
to fix this so be it. The actual work that leads to the fix was not done by me,
as a matter of fact all of these things have been well documented and put up
online in various places, I have put down the names of the various people who
helped me out as well as the online references to the materials at the bottom of
this post.

Due to severe lack of motivation, all I could do was look up the error online
and was even more de-motivated after reading up that I need multiple items which
I did not posses at that time, I decided to give up. So I promptly put back the
Wii in it in a bag and kept it at my friend's place.

This specific brick stuation occurs when a "Korean Region" Wii is updated with a
"non-Korean Region" (US, EU, JP) firmware version which is 4.2 or greater. This
was a move made by Nintendo to disable all Korean region Wii(s) that were
running in the Non-Korean region firmware and have been modded to other
firmwares to run games region free and so on.  At the time (2014) when this
happened, I was not aware of the fact that we had a Korean Wii which had been
modified to run out of Korea, you could say I did not pay attention to detail
regarding the Wii. Add to this I lacked the knowledge of setting up HomeBrew
stuff on Wii, or having failsafe measures installed to prevent such an incident
from occurring.

After attended Hillhacks 2015, I was motivated to open up this piece of
effective paper weight and wanted to know what exactly needs to be done. After
going through a video[3] in youtube, I understood I will need the following
tools at the minimum to even start to attempt recovery.

The GameCube Controller can be used to access the recovery mode[3] which acts as
the starting point from which the unBricking[4] process starts. It also helps
identify which Firmware Version and Region has caused the brick.

A ModChip can help boot the modified game discs which is needed as a part of the
recovery process. Also we needed to identify the optical drive firmware chip
version which is critical in deciding which ModChip[5] will work and which will
not.

After some searching around I found out that DriveKey[8] was the one that was
the latest in the series of Mod Chips and the most compatible one. In addition
to this newer versions of DriveKey had the autoboot enabled by default without
needing to explicity enable that option in the DriveKey menu. 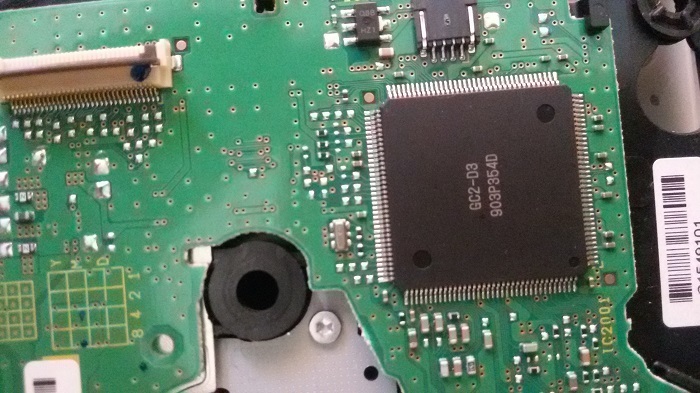 After identifying the base requirements I sent mail out to my friend to help get
the components. After couple of months of waiting, I got the GameCube Controller
but he forgot to get me the ModChip. Which made me put things back on ice, since
to do anything, I still needed the ModChip.

So the Wii was put in a bag and was again kept at my friend's house.

It was not until August 2016, I came across an advertisement in a forum called
erodov[6] that someone is willing to sell an used Nintendo Wii for 3000 INR
(roughly 45 USD) a fresh console goes for around ~149 USD (9,931 INR) as of 2009
and this model which I am trying to fix is no longer in production. So I decided
to get one for myself which I could use as a reference for fixing my current Wii
and I made sure the Wii I was getting was not some retroffitted Korean region
Wii, this one was a European Wii with European Firmware and no mod-chip
installed. So all I needed to do was update the firmware to the latest 4.3E and
then put in the homebrew stuff.

Thanks to the excellent guide by MicrowaveSam[7] in his youtube channel, I was
able to install homebrew stuff into this unmodded Wii, once I understood the
basics of how things are done I was motivated again to look into the bricked
Korean Wii. So began my search to get a compatible Mod Chip which I can fit
between my Wii and it's Optical Drive to make various Backup DVDs boot.

Of course, I had to get my old Wii back which was tucked in some place at my
friend's house for about an year now, and even he was not sure where it
was. After spending about 20 minutes in his house along with the help of his
parents, I managed to find the very same bag tucked away in a cupboard. I
thanked his parents who helped me to find this bag.

Obtaining DriveKey on the other hand was a whole different story. DriveKey's
production stopped by around 2009, so most of the Mod Chip vendors I contacted
did not have one in stock to be shipped. After much difficulty and a lot of
snooping around in search engines I finally came across this French Mod Chip
vendor called Foxchip.com[9] unfortunately all of their website was in French,
with a bit of intuition I was able to figure out where the section where they
were selling Mod Chip for Wii. And they showed that they had DriveKey in stock,
but I was a bit reluctant at first to place the order since I had this bad
experience of placing order on another mod-chip website[10] which also claimed
"in stock", after placing the order it blocked my friend's credit card and they
did not respond to queries via their contact page, luckily the credit card was
not charged and no money was lost. So this time instead of directly placing the
order, I first contacted them via their contact form to get confirmation on the
availability of the Mod Chip. To my surprise they were quick to respond and they
replied back in english, they confirmed that the chip was in stock and they
would be alright with shipping. So I asked another friend to help me order the
Mod Chip, unfortunately we had to ship the Mod Chip to another friend of mine
who was in UK because of payment issues if it was shipped outside Europe.  Then
the Mod Chip was mailed to another person in UK who was flying out to Kerala in
India and then another friend of mine (Cherry) had to go pick it up and then
bring it to KeK. 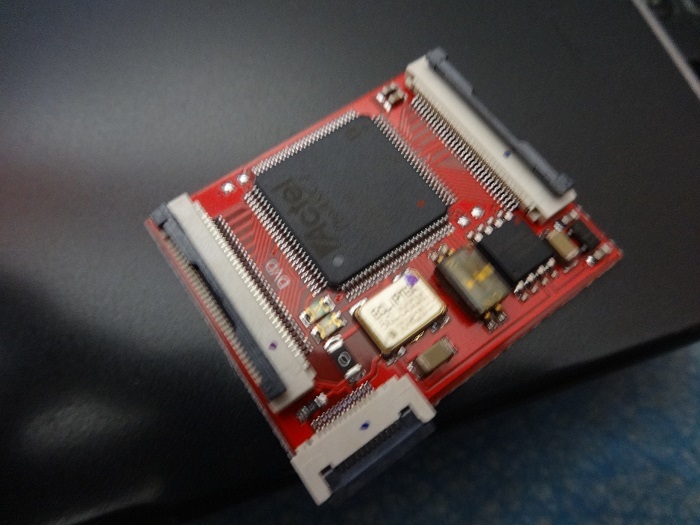 After all that I had the final piece of puzzle that was needed to fix the
Bricked Wii.

In order to unbrick the "Error 003", I spent quite a lot of time on the
interwebz searching for the "proper" method. Finally I came across some
excellent resources at GBATemp.net[11] and Hacksden[12] Blog by mauifrog[13] and
this excellent video[14] series by Raed Abbasi[15] I was able to unbrick the
Wii. But it was not without out it's own little hurdles along the way.

So here goes the actual process of fixing. 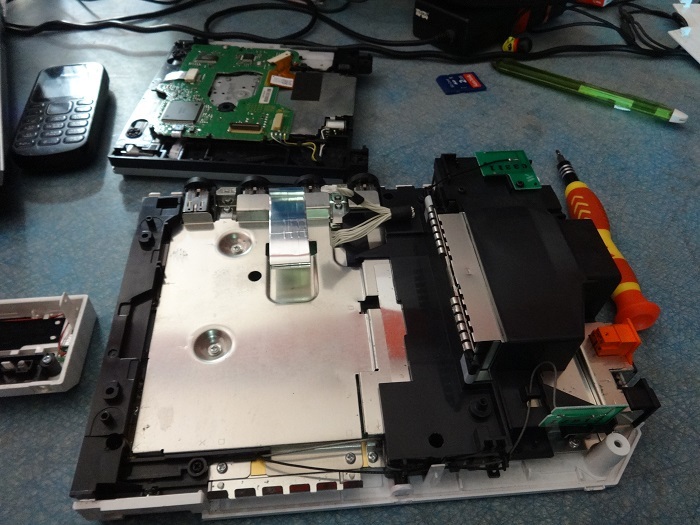 Opened up the Wii and separated the Optical Drive from the rest of the System. 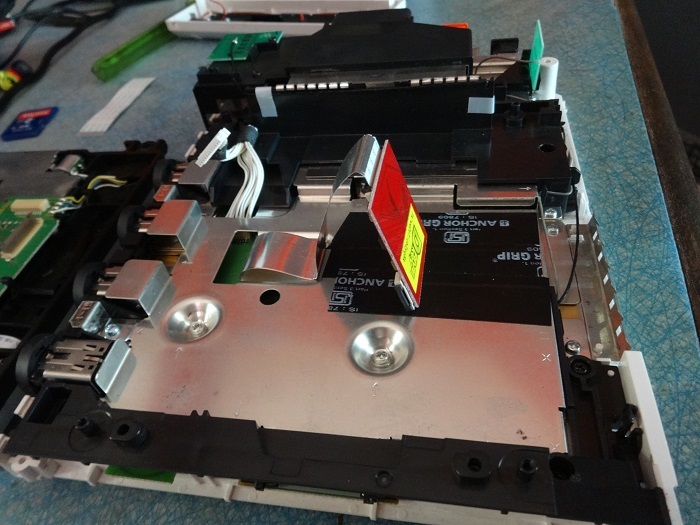 That is one half of the modchip attached in the path way of the Optical Drive. 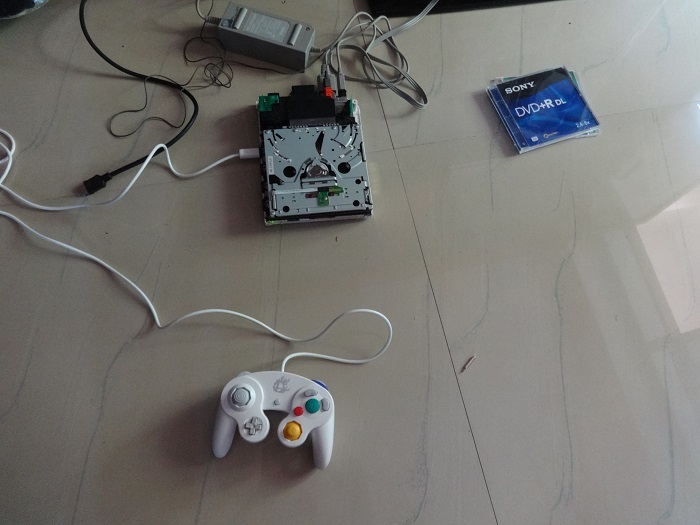 After a bit of tinkering around with the GameCube controller, which involved
removing it and then holding the D-pad silicone manually with 4 fingers, to be
able to make it boot into the recovery mode. 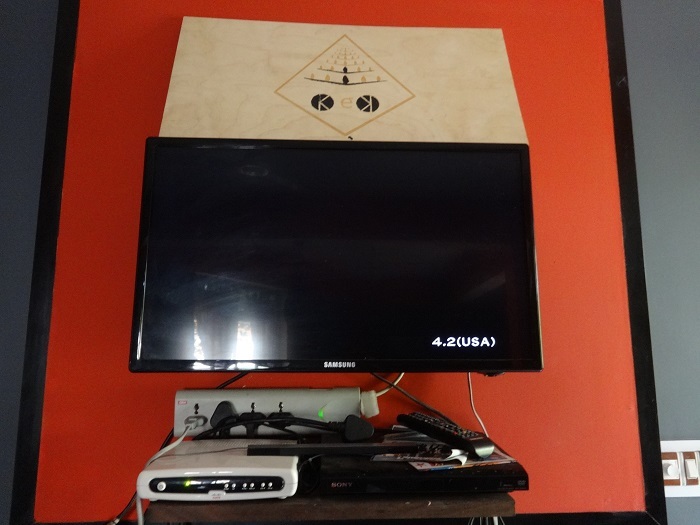 So guessing it was a bad disc, I re-wrote the MarioKart-PWNS ISO onto a fresh
DVD-R (DVD5) this time at 4x speed and put it into the Bricked Wii and this time
it booted!!! 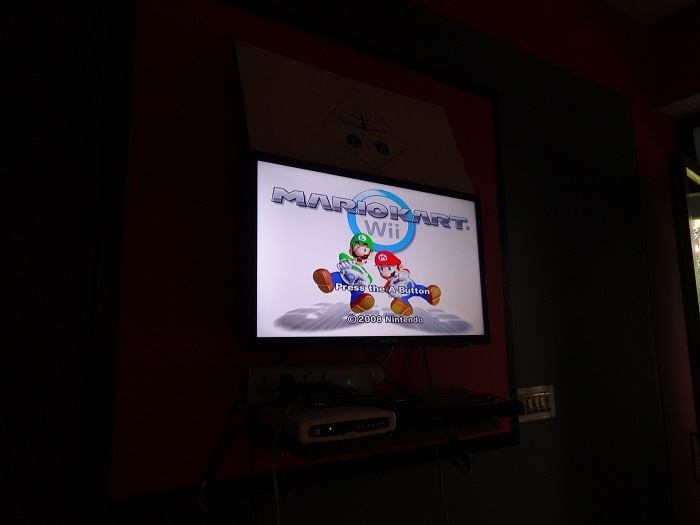 Next the issue was to get the Super Smash Bros Brawl to boot, but I did not have
much luck here, it kept gaving me errors about reading the disc.

So just like the initial attempt with MarioKart-PWNS disc, I thought it might be
a bad DVD.

Same as before, I re-wrote the SSBB (PAL) into DVD+R DL (DVD9) this time at 4x
speed. But I still had no luck getting it to Boot. But I had made sure that the
disc was bootable in the Dolphin[16] emulator and it worked fine.

Using the second Wii, I did the same techniques for loading SSBB (PAL), and it
worked.  So my guess was that the D3 Chip in the bricked Wii's optical drive was
not reading the SSBB disc. Time to swap, I swapped the Optical Drives of the
Bricked an the working Wii. 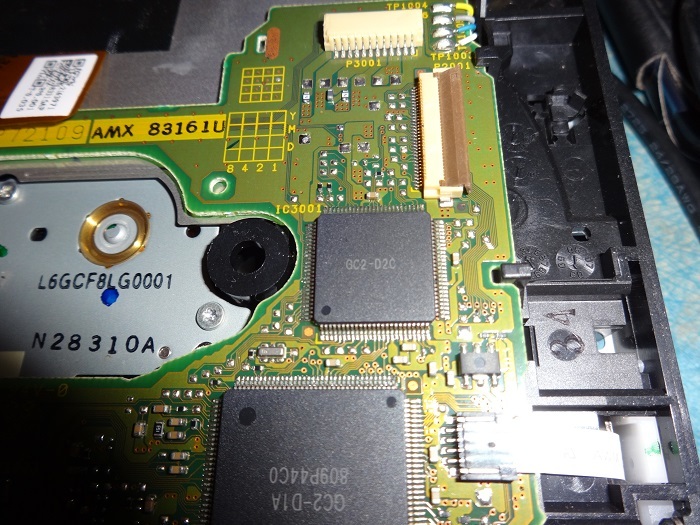 As expected it was a different Chip D2C which is known to be more compatible
with DVD9 backup discs than D3. 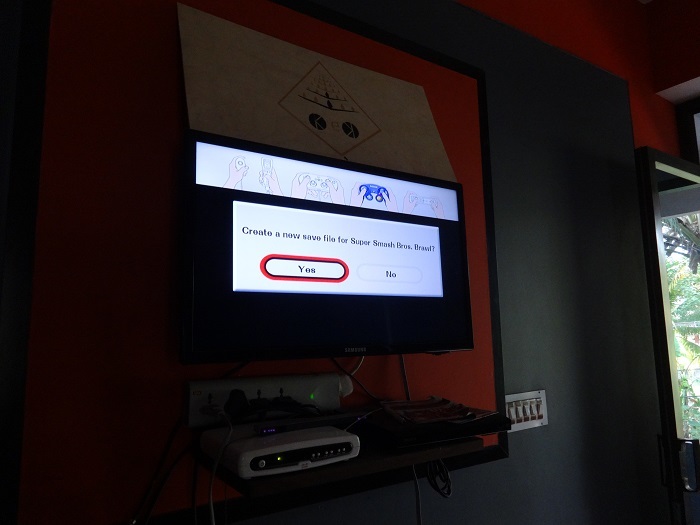 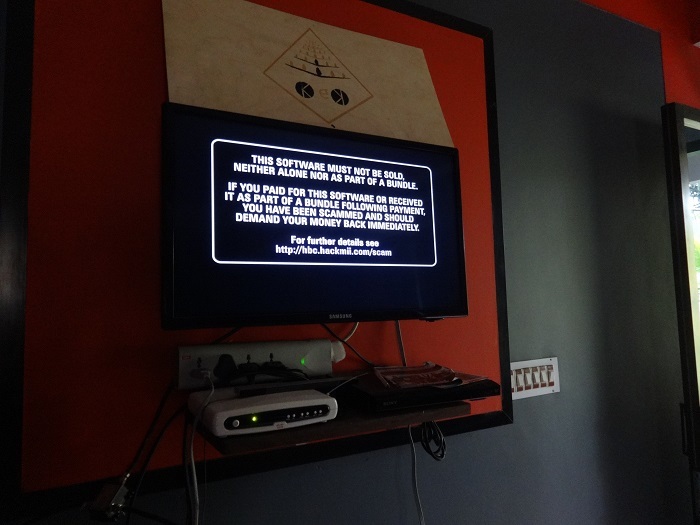 From here I executed the Stack Smash exploit, to get into the HackMii installer. 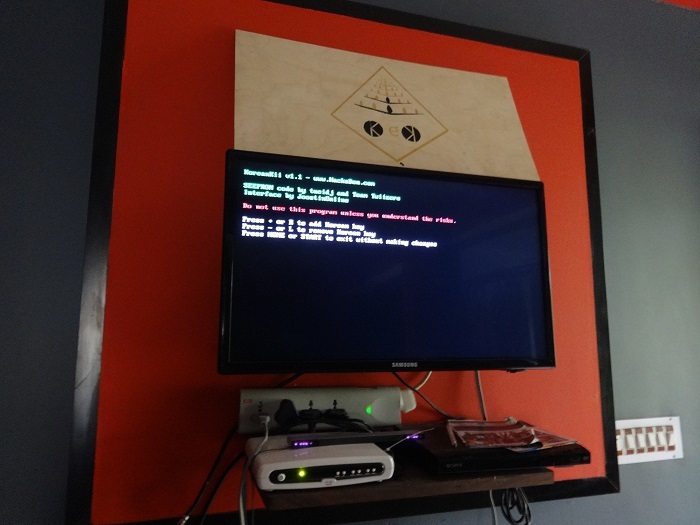 Removing the pre-installed Korean Key[17] from the Wii (No more bricks!!) Once it booted, it was time to set up the WiFi 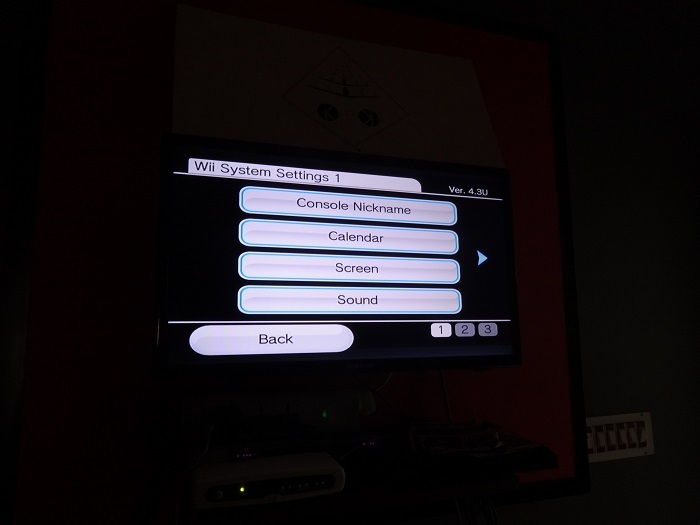 Using Multi Mod Manager, I updated Wii's Firmware to 4.3U The sweet sweet System Menu instead of Error 003!!